'Human safaris' to the Jarawa

Although India’s Supreme Court in 2002 ordered that the highway through the Jarawa’s reserve should be closed, it remains open – and tourists use it for ‘human safaris’ to the Jarawa.

Poachers enter the Jarawa’s forest and steal the animals the tribe rely on for their survival. They have also introduced alcohol and marijuana and are known to sexually abuse Jarawa women.

In 1999 and 2006, the Jarawa suffered outbreaks of measles – a disease that has wiped out many tribes worldwide following contact with outsiders.

The tribes of the Andaman Islands – the Jarawa, Great Andamanese, Onge and Sentinelese – are believed to have lived in their Indian Ocean home for up to 55,000 years.

They are now vastly outnumbered by several hundred thousand Indians, who have settled on the islands in recent decades.

Today, approximately 400 members of the nomadic Jarawa tribe live in groups of 40-50 people in chaddhas – as they call their homes.

Like most tribal peoples who live self-sufficiently on their ancestral lands, the Jarawa continue to thrive, and their numbers are steadily growing.

They hunt pig and turtle and fish with bows and arrows in the coral-fringed reefs for crabs and fish, including striped catfish-eel and the toothed pony fish. They also gather fruits, wild roots, tubers and honey. The bows are made from the chooi wood, which does not grow throughout the Jarawa territory. The Jarawa often have to travel long distances to Baratang Island to collect it.

Both Jarawa men and women collect wild honey from lofty trees. During the honey collection the members of the group will sing songs to express their delight. The honey-collector will chew the sap of leaves of a bee-repellant plant, such as Ooyekwalin, which they will then spray with their mouths at the bees to keep them away. Once the bees have gone the Jarawa can cut the bee’s nest, which they will put in a wooden bucket on their back. The Jarawa always bathe after consuming honey. 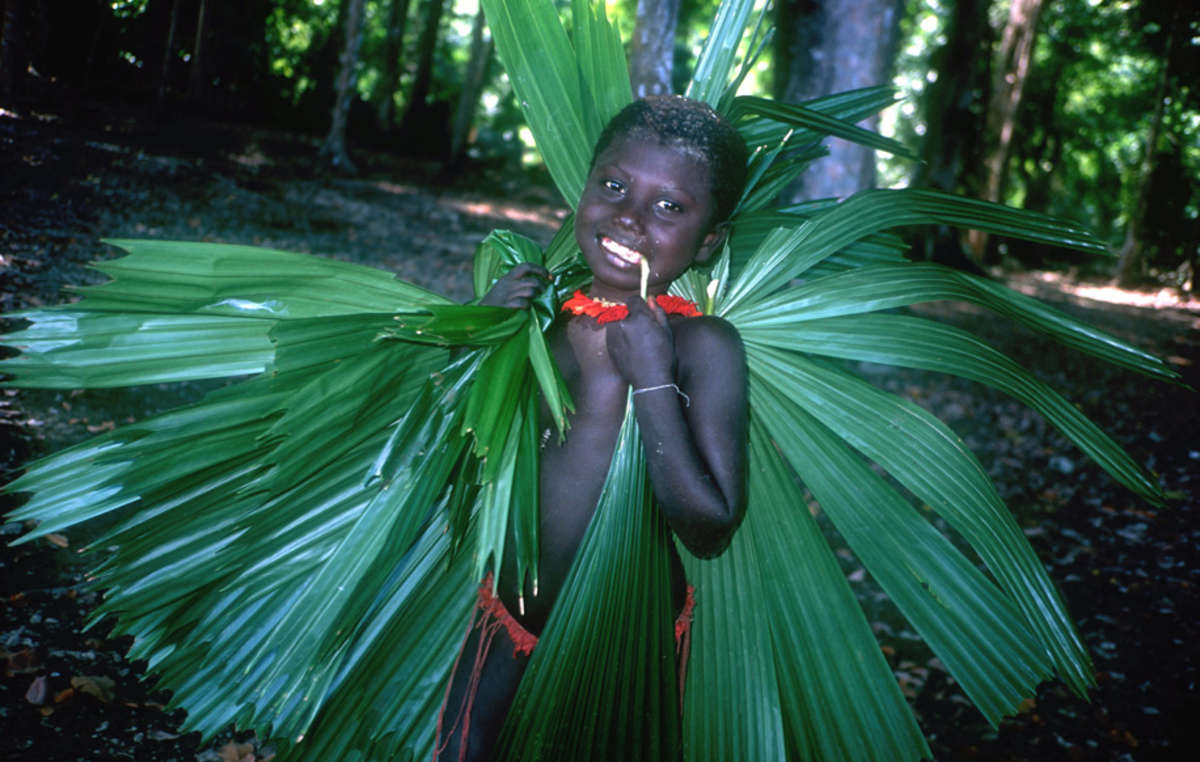 The Jarawa thatch their shelters with leaves from the forest. © Survival

A study of their nutrition and health found their ‘nutritional status’ was ‘optimal’. They have detailed knowledge of more than 150 plant and 350 animal species.

The Jarawa of the Andaman Islands enjoy a time of opulence. Their forests give them more than they need.

In 1998, a few Jarawa started to emerge from their forest for the first time without their bows and arrows to visit nearby towns and settlements.

In 1990 the local authorities revealed their long-term ‘master plan’ to settle the Jarawa in two villages with an economy based on fishery, suggesting that hunting and gathering could be their ‘sports’. The plan was so prescriptive it even detailed what style of clothes the Jarawa should wear. Forced settlement had been fatal for other tribes in the Andaman Islands, just as it has been for most newly-contacted tribal peoples worldwide.

I am civilized and they are not civilized.


An Indian lawyer making her case for the forcible settlement of the Jarawa, in 2001

Following a vigorous campaign by Survival and Indian organisations, the resettlement plan was abandoned, and in 2004 the authorities announced a radical new policy: the Jarawa would be allowed to choose their own future, and that outside intervention in their lives would be kept to a minimum. This was an enormous success for the international and Indian campaign.

No attempts to bring them to the mainstream of society should be made.

What problems do the Jarawa face?

Of the four Andaman Island tribes, it is the Jarawa’s situation that is the most precarious.

The Jarawa face many threats:

Jarawa denounce poachers who invade their land. This group was filmed as they voluntarily came out of their reserve to complain to local administration officials about the poaching.

The girls say, that the outside boys pressure them to do a lot. They pressure them with their hands and fingernails, when the girls get angry. They chase them under the influence of alcohol. They have sex with the girls… They drink alcohol in the girls’ house. They sleep in the Jarawa’s house. They smoke marijuana and then chase the girls.


Jarawa man speaking out against the abuse in 2014

Attempts to ‘mainstream’ the Jarawa

In India, ‘mainstreaming’ refers to the policy of pushing a tribe to join the country’s dominant society. It has a devastating effect on tribal peoples. It strips them of their self-sufficiency and sense of identity, and leaves them struggling at the very margins of society. Rates of disease, depression, addiction and suicide within the tribal community almost inevitably soar.

In 2010 the Andaman Islands’ member of parliament called for ‘quick and drastic steps be taken to bring the Jarawa up to the basic mainstream characteristics’ and for children to be sent to residential schools in order to ‘wean’ the children away from the tribe. He described the Jarawa as being ‘in a primitive stage of development’ and ‘stuck in time somewhere between the stone and iron age’.

Influential figures in India, including government ministers, have often called for the Jarawa to be assimilated, believing that they are ‘backward’ or ‘primitive’. This request, however, has not come from the Jarawa, who show no sign of wanting to leave their life in the forest.

The outsiders are bad men. They abuse us. I prefer to stay in the jungle.

Such an attitude can stem from racist disdain or from a genuine concern for the tribe’s welfare; either way it is always based on a misunderstanding of both the Jarawa’s current excellent quality of life, and the miserable experiences of tribal people who have been forcibly assimilated.

Since 2004, the Indian government’s policy towards the Jarawa has been very positive: the general principle is that the tribe themselves should control their future, with minimal intervention from the state. However, there are still many who are clamoring for this to change.

What is Survival’s position on ‘mainstreaming’?

Survival advocates neither isolation nor integration, believing – as with all tribal peoples – that they themselves are best placed to determine what, if any, changes they wish to make to their lives. Crucial to having the time and space to make these decisions is that their land is properly protected from outside incursions.

The principal threat to the Jarawa’s existence comes from encroachment onto their land, which was sparked by the building of a highway through their forest in the 1970s. The Andaman Trunk Road (ATR) brings outsiders into the heart of their territory.

The ATR has also encouraged ‘human safaris’, where tour operators drive tourists along the road in the hope of ‘spotting’ members of the tribe.

Illegal hunting, fishing and gathering, from both local and foreign poachers, remains a serious threat to the Jarawa’s survival. The theft of the food they rely on risks robbing them of their self sufficiency and driving the tribe to extinction.

What is Survival’s position on land encroachment and poaching?

Since 1993 Survival has been lobbying the Indian government to close the Andaman Trunk Road, believing that only the Jarawa should decide if, when and where outsiders traverse their land.

In 2002, the Indian Supreme Court ordered the closure of the road, yet it still remains open.

In 2013, following a campaign from Survival and local organization ‘Search’ to ban ‘human safaris’, the Supreme Court banned tourists from travelling along the ATR for seven weeks. After the Andaman Authorities changed their own rules in order to allow the human safaris to continue, the Supreme Court had no choice but to reverse the ban.

In October 2017, the Andaman Authorities opened the long-awaited alternative sea route to Baratang. This sea route was supposed to stop the human safaris. But despite the authorities’ commitment to ensuring all tourists would have to use the sea route, very few currently do, and the market in human safaris along the road is flourishing.

Survival has been calling for the Andaman authorities to clamp down on poaching and to ensure that those arrested are prosecuted. Although in recent years many poachers have been arrested, none have been been sentenced by the courts, despite the offence carrying a prison term of up to seven years.

Act now to help the Jarawa

Survival’s Andamans campaign focuses on the Jarawa, because their situation is the most precarious of the four tribes. Your support is vital for the Jarawa’s survival. There are lots of ways you can help.

News from the Jarawa

News from the Jarawa