An estimated 20,000 Jenu Kuruba have been illegally evicted from the Nagarhole National Park, India. Many more are threatened with eviction.
Guards harass, threaten, and even shoot members of the tribe, who worship the tiger as a god.

These evictions are supported by WCS, the Wildlife Conservation Society. They are devastating for the Jenu Kuruba, and won’t help the tiger.

The best guardians of the forest

The Jenu Kuruba’s belief system centers around their connection to the forest, its wildlife, and their gods who live there.

They are experts in their environment, having 25 names for different parts of the forest. They gather medicine, honey, fruits, vegetables, tubers and the thatch and bamboo needed to build their houses.

The Jenu Kuruba are famed for their honey collecting skills, their name means “Honey collectors.” The philosophy that guides the Jenu Kuruba from birth to death is, “Nanga Kadu Ajjayya… Nanga Kadina Jenu Ajjayya – Our forests are sacred… The honey from our forest is sacred.”

These beliefs are behind the tribe’s careful management of their environment and has ensured the survival of the tiger. Indeed, the healthy tiger population found in their forest is what drove the Indian government to turn the area into a Tiger Reserve. 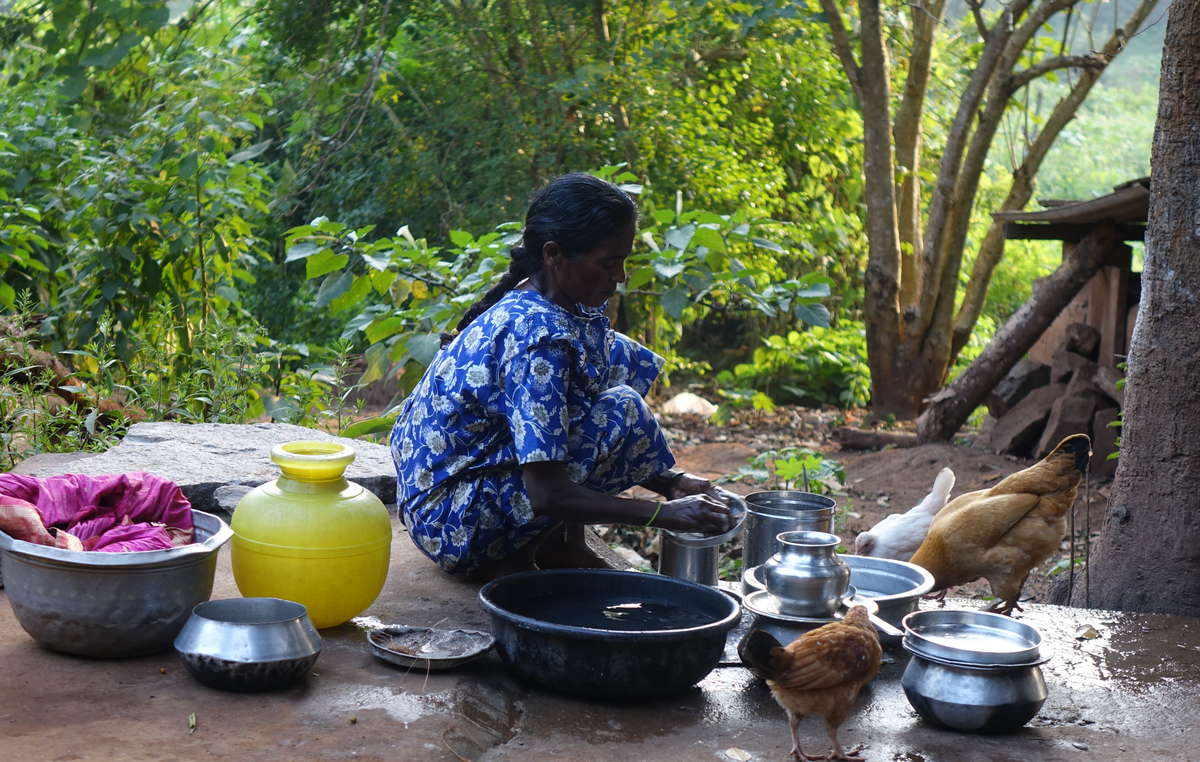 Despite the numerous illegal evictions they have had to face, about 6,000 Jenu Kuruba have resisted and have managed to stay in the park. Conservationists claim these evictions are necessary to protect the tiger, but they are wrong. It’s no coincidence that Nagarhole, where the Jenu Kuruba have been nurturing and protecting their forest for generations, has the second highest concentration of tigers in the whole country.

Statistics like this are part of a growing body of scientific evidence that backs up what Indigenous People have long been trying to tell us – they are the best conservationists and guardians of the natural world.

Yet the Forest Department, supported by the Wildlife Conservation Society (WCS – a $300 million US conservation body) and local organisation Living Inspiration for Tribals (LIFT) is trying to evict the Jenu Kuruba from their forest by using threats, harassment and abuse.

The colonial fortress conservation dogma still dominates in India (as it does across much of Asia, and Africa). This model of conservation can be traced back to the creation of Yellowstone and Yosemite National Parks in the 19th Century in the United States, which led to the brutal eviction of Native American tribes.

Fortress conservation, as this model is called, is blind to the skills of Adivasis (India’s Indigenous Peoples) managing their forests and instead paints them as a danger to biodiversity and wildlife.

India’s tiger policies are based on the principle of creating people-free areas for tigers – meaning at least 300,000 Adivasis are at risk of eviction.

Hundreds of thousands of people have already been torn from their homes or had their livelihoods ripped from them, their identity left in tatters. Once proud communities, living self-sufficiently from the land, have been reduced to landless refugees, struggling to survive.

Indian law stipulates that evictions must not take place without the community’s consent and unless there is proof that co-existence between people and wildlife is impossible.

But the forest department, and big conservation organizations like WCS, ignore this and continue to push for colonial, people-free, conservation.

The forest department is determined to force them out, but the Jenu Kuruba are fighting back against this attempt to drive them from their forest homes. Hundreds of illegally evicted Jenu Kuruba families are demanding their right to return.

Evicting the Jenu Kuruba is illegal

Under Indian and international law, the Jenu Kuruba must consent to developments carried out on their land. They did not consent to the creation of the tiger reserve.

In 2006, the Forest Rights Act was passed to address “historical injustice” to India’s Adivasis and recognized their right to live in, and protect, their forest. However, despite making more than 4,000 applications to the authorities, the Jenu Kuruba’s forest rights have still not been recognized in the Tiger Reserve.

Forest guards can’t legally evict the Jenu Kuruba without proof that they are harming wildlife and co-existence is impossible. No such proof has been provided. In fact, there is a far higher density of tigers in Nagarhole than in two neighbouring tiger reserves, from which all the people have been evicted.

The evictions are illegal on multiple counts, violating many areas of Indian law including its Constitution. Yet, often with WCS’s support, the Forest Department has already removed an estimated 20,000 Jenu Kuruba from their forest, and it is trying to force the remaining 6,000 to leave.

WCS calls the evictions “voluntary” but they are forced and illegal.

The Jenu Kuruba are subjected to a relentless campaign of harassment, restrictions and threats aimed at forcing them out.

- They live under the constant threat of violence and arrest under false charges. In 2021 Basava, a Jenu Kuruba man living near Nagarhole, was shot by forest officials in retaliation for defending his sister when she was harassed by the guards.

- They’re prevented from cultivating crops in their gardens, collecting food, honey and firewood, or visiting their burial grounds and sacred places in the forest. They face harassment and threats if caught going about their daily lives.

- They’re even banned from repairing their houses. 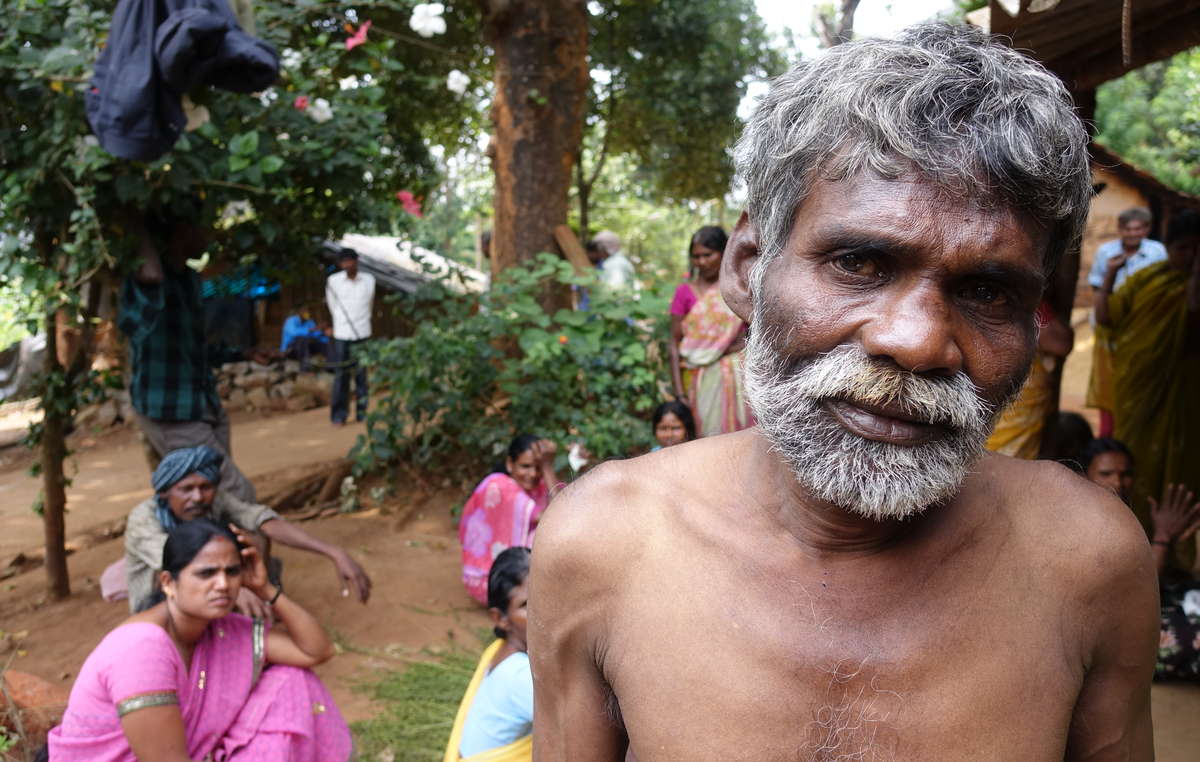 JD Thimma, shot by forest guards while he was collecting mushrooms, his friend Nagraj was killed. Nagarhole Tiger Reserve. © Survival

- Those who stand up for their rights are harassed and are frequently falsely charged and arrested. As one leader told Survival: “They’ve filed cases against us to silence us and put us in jail so that no other voices speak out from the villages. It’s to create fear amongst the tribal people in the forest.”

In the face of this continual harassment, the Jenu Kuruba are often left with little choice but to leave their forest homes. There is nothing “voluntary” about it.

Jenu Kuruba communities sent a letter to the US government Fish and Wildlife Service spelling out their opposition to evictions stating, ‘We would like to make it clear that we will never leave our forests’ and explaining that funding WCS’s project to support government-sponsored ‘voluntary relocation’ would be ‘aiding and abetting the government and WCS’s plans to evict us from our forests.’

Survival has presented evidence of harassment and coercion, demonstrated the failure of the Forest Department to engage with due legal process, and shared testimony from Jenu Kuruba where they make clear they will not leave their “motherland” in the Nagarhole forest.

WCS has ignored multiple letters from Survival and WCS India runs training for Forest Department staff on “relocations” and continues to refer to them as “voluntary.”

Act now to hold WCS and the forest department to account

Evictions are bad for tribes, and bad for the tiger

Evicted families say their communities have been devastated, that many people died after they were relocated. They lament their “miserable lives,” and insist they are desperate to return to their forest homes.

In January 2022, 28 Jenu Kuruba families, who had been illegally evicted in 2010, staged a dramatic return to their original village in the forest. They say they were lied to at the time of their “relocation” – they hadn’t been told that they had a right to live in the forest and the promises made to them hadn’t been kept. Their houses are leaking and dilapidated and, even after 12 years, the lands they were given are uncultivable.

They threatened to commit mass suicide rather than return to the relocation site, with one woman saying, “I would rather die where my gods are, where our graveyard is and where my ancestors are,” adding, “It’s been hell, so we don’t want to go back.” But forest guards forced them to return, bundling them into vans and jeeps and beating even pregnant women with big sticks.

If life is so good for the evicted families, why do they want to return to the forest and why are the 6,000 people remaining in the reserve not eager to leave?

When the Jenu Kuruba discovered that WCS told the BBC they have “a very difficult life… and constantly liv[e] in fear of elephants, leopards and tigers,” they scoffed at the idea they would be frightened of the very animals they worship.

Evictions also do not benefit the tiger. Evidence shows their numbers are flourishing in reserves where Adivasis still live. While the custodians of the forest are evicted, thousands of tourists are welcomed in. Scientists have found that hordes of tourists in jeeps cause tigers to suffer high levels of physiological stress.

Ally with the Jenu Kuruba

At a recent protest demanding their rights, Jenu Kuruba leaders said: "We want the Tiger Reserve to close and for the forest to be handed over to us, we can take care of the tigers and the forest better.”

We’re fighting alongside the tribe to ensure their land rights are recognized, and that those who’ve been evicted can return.

We are ensuring that the Jenu Kuruba’s voices are heard both in India and internationally and continue to lobby the government to recognise their rights to live in, manage and protect their forest.

We are galvanizing social media support and campaigning against WCS’s racist model of conservation – urging individuals and funders not to support conservation that destroys lives.

Our partnership with the Jenu Kuruba forms part of a broader campaign we are fighting against widespread atrocities committed in the name of “conservation.”

We want to #DecolonizeConservation, and champion a new approach that has tribal and Indigenous Peoples at its heart.

Our campaign is already having an impact!

When the Jenu Kuruba wrote to the US government objecting to its funding of WCS’s relocations, Survival helped make officials sit up and take notice. We re-sent the letter over 20 times, and supporters bombarded the US Department of Interior with thousands of emails.

The US government subsequently announced that it will no longer fund any conservation relocations.

Tiger Reserve Tribes
Learn more about the tribes living in Tiger Reserves
Take a look at our interactive map showing tiger reserves where tribal people risk illegal and forced evictions
Why do we need to Decolonize Conservation?
Survival Report: Illegal Evictions from Tiger Reserves
Fiore Longo, ‘Of Tigers and Men — the shocking truth about tiger conservation’
Sierra – The national magazine of the Sierra Club, Michael Benanav, ‘Can Tribes and Tigers Coexist in India’s Nature Reserves?’
Down to Earth, Ashish Kothari, ‘In the name of tiger’

Send an email to the Indian government and WCS

We take no funding from governments.

News from the Jenu Kuruba 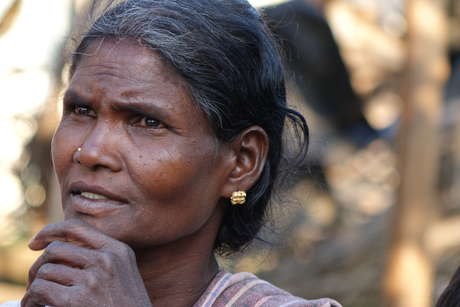 A honey-gathering tribe protests for their right to return to live in Nagarhole Tiger Reserve. 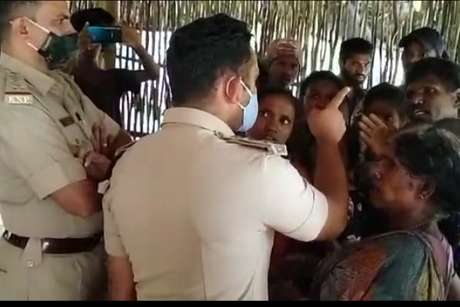 Jenu Kuruba are being harassed and threatened for demanding their rights to live in their forest, risking a covid outbreak. 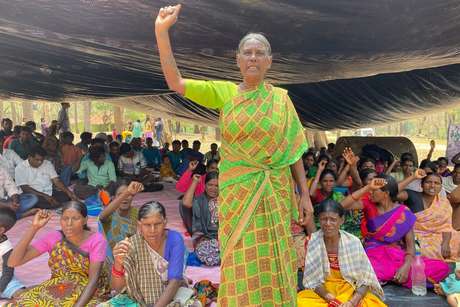 Tribal people have launched an indefinite protest in the Nagarhole National Park, India. 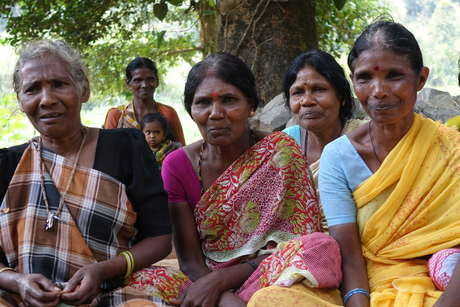 “Don’t fund our eviction”: honey-collecting tribe pleads with US government

Two tribal communities famed for their honey-gathering skills have written to the US authorities.