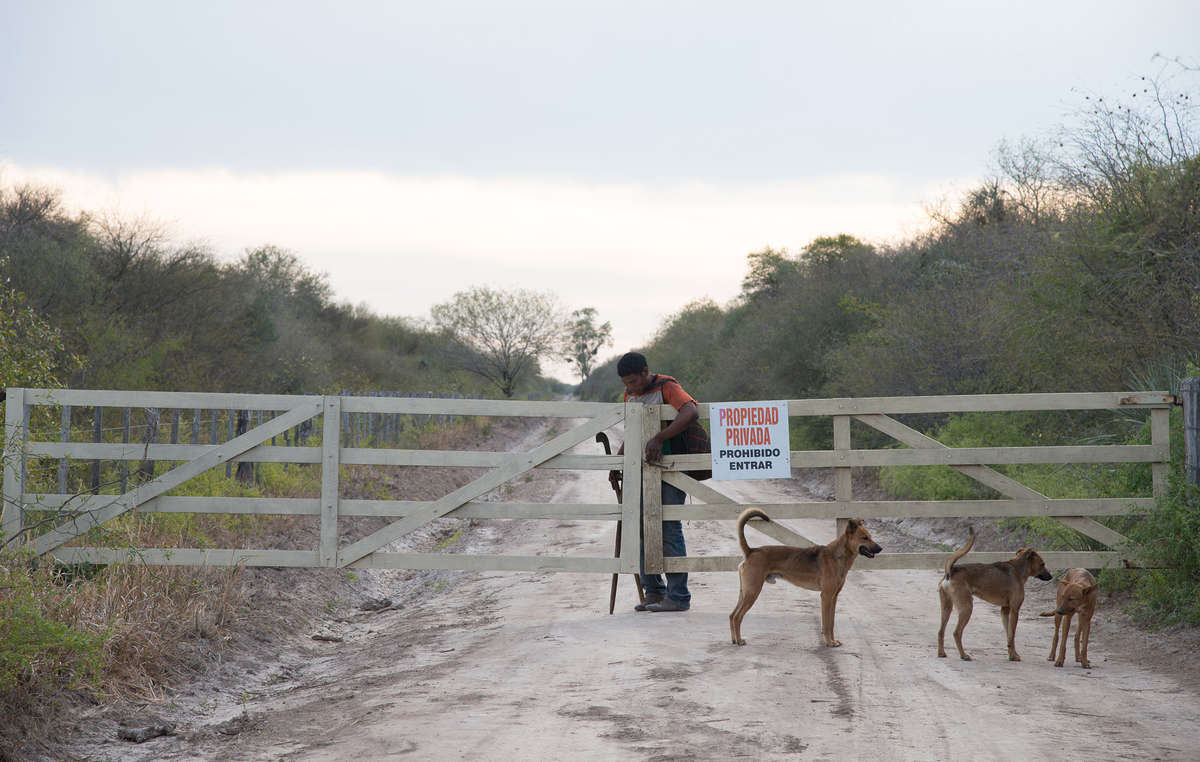 Cattle ranches now occupy the Ayoreo’s land. An Ayoreo man goes hunting behind a gateway to one of the ranches: the sign reads “Private property. No Entry.” © Gerald Henzinger/Survival

BMW and Jaguar Land Rover’s leather suppliers are linked to illegal deforestation in the territory of one of the world’s most threatened uncontacted tribes, according to an official complaint launched today by Survival International.

Two Italian companies, Pasubio and Gruppo Mastrotto, source leather from tanneries that are supplied by cattle ranches guilty of occupying and illegally deforesting the land of uncontacted members of Paraguay’s Ayoreo tribe. These Ayoreo are the last uncontacted Indigenous people in South America outside the Amazon, and the ranches threaten their very existence.

BMW, Jaguar Land Rover and many others buy the two companies’ leather to make interiors, seats and steering wheels.

“This is our family and our forest. The coñone [non-Ayoreo] came later but they say it’s all theirs. They say we have to buy our land.” Ñamje Picanerai, Ayoreo-Totobiegosode man contacted in 1986. © Survival

This link is at the heart of a formal complaint filed today by Survival International, in agreement with and authorized by contacted Ayoreo people, against Pasubio at Italy’s ‘National Contact Point’ (NCP) for the OECD.

A few weeks ago, Survival sent cease-and-desist letters to both companies urging them to halt these imports. Gruppo Mastrotto has responded by initiating a dialogue with Survival, which is still ongoing, but Pasubio has sent only a brief disclaimer. Survival has therefore, in agreement with and authorized by contacted Ayoreo people, submitted a formal complaint against Pasubio under the OECD’s Guidelines for Multinational Enterprises.

The link between the leather used in the car industry and the illegal destruction of the Ayoreo’s forest was first revealed in an investigation by Earthsight. In two reports, Grand Theft Chaco I and Grand Theft Chaco II, Earthsight revealed that almost two-thirds of the hides exported from Paraguay go to Italian companies, principally Pasubio, which depends for more than 90% of its €313m annual revenue on the automotive industry.

Today’s complaint states that Pasubio appears to have violated several principles in the OECD Guidelines, including those on Disclosure of Information (III), Human Rights (IV), Environment (VI) and Consumer Interests (VIII) and demands that the company stops importing hides from tanneries in Paraguay that are responsible for and/or involved in the deforestation of the Ayoreo’s forest. 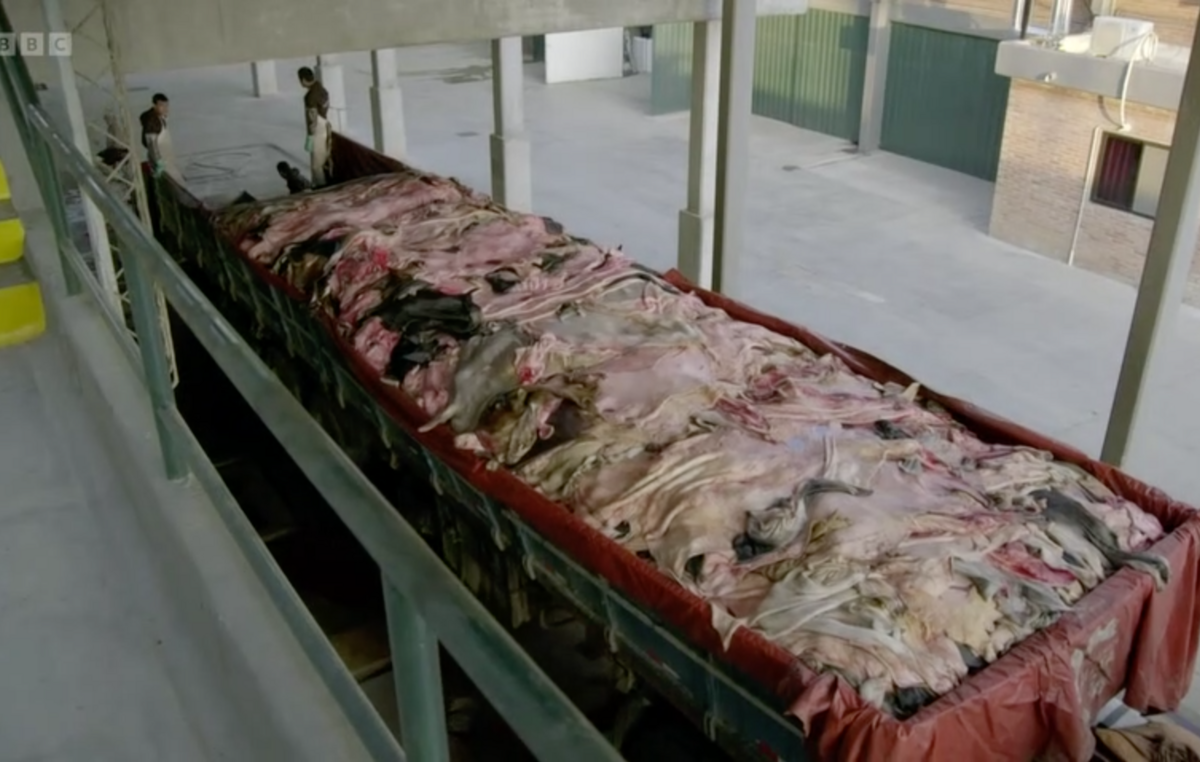 The head of Survival’s Ayoreo campaign, Teresa Mayo said today: “The Paraguayan government has handed over most of the Ayoreo’s ancestral territory to agribusiness companies who are relentlessly clearing the forest: first they cut down the valuable hardwoods, then they set fire to the forest, and finally they introduce livestock onto the cleared land. The Ayoreo are witnessing the destruction of their livelihoods, their physical and mental health, and even their lives. But they remain determined to fight for their continued existence, alongside their uncontacted relatives, who are forced to live on the run from bulldozers in oases of forest that are getting smaller and smaller every day."

Francesca Casella, director of Survival Italy, said today: “Demand for car leather is predicted to increase by more than 5% per year until 2027. Clients and end-consumers need to be aware of this, and since Italy is the world’s biggest buyer of Paraguayan leather, it has the power and responsibility to intervene by stopping doing business with cattle ranches that operate illegally on Indigenous land with the connivance of corrupt politicians and officials.”

Tagüide Picanerai, an Ayoreo Totobiegosode man, said today: “The harmful impact that beef and leather production has is deforestation, and that affects the people living in the area (…). Leather is like a hidden aspect of cattle ranching, it isn’t taken into account as we only talk about beef, but it really does affect the local people a lot. It’s those who produce the cattle and export them and then sell them over there in Europe who benefit, but here it means deforestation and the Ayoreo people suffer.”

- The Ayoreo Totobiegosode have been fighting for the return of their ancestral lands since 1993, when they presented a formal land claim to the government.

- In 2001, the government of Paraguay formally recognised a 550,000 hectare territory in Alto Paraguay province as the ’Natural and Cultural Heritage of the Ayoreo Totobiegosode (PNCAT). However, to date the authorities have only transferred some tens of thousands of hectares of land titles to the Ayoreo, and they continue to violate both the injunction issued by the Inter-American Commission on Human Rights (IACHR) over the territory (which requires the State of Paraguay to protect and safeguard the PNCAT and the uncontacted groups living there by preventing the entry of third parties and unwanted contact); and resolutions issued in 2018 by the National Forestry Institute (INFONA), which prohibit all deforestation inside the area.

- Paraguay’s meat and hides are responsible, per unit weight, for more deforestation than any other raw material on Earth (Grand Theft Chaco I, p. 36).

- Paraguay’s Chaco forest is being destroyed at one of the fastest rates on Earth.

- Some of the car companies’ responses to Earthsight’s original investigation are listed here.