A version of this article appeared in The Independent on March 17, 2019

Conservation must recognise Indigenous peoples as senior partners in the fight to protect their own land, not as ‘squatters’ and ‘poachers’ to be evicted and criminalised

Scores of innocent people have been beaten up, raped and murdered in a series of atrocities which were committed by guards funded by WWF and then covered up, according to an in-depth investigation released by Buzzfeed. Sadly, these revelations are only the tip of the iceberg. Around the world, in the name of “conservation”, thousands of families have been forced into destitution with no recourse or appeal. Some have their homes burnt down in front of them, others see their children, partners, friends and family murdered or maimed with impunity. The fact that abuses are perpetrated by eco-guards, park rangers, poaching patrols, the supposed “good guys,” suggests it might be time to seriously re-think how we do conservation.

For nearly 30 years, Survival International has been trying to get the world to take the atrocities of big conservation seriously, but much of the public at large, the world’s media, and WWF themselves have remained largely indifferent. The ecological crisis is urgent and desperate, which presumably explains why WWF, and those who continue to support them, behave as if the ends justify the means. But evicting tribal peoples from their ancestral lands, removing the environment’s best allies from the ecosystems that they have shaped, nurtured and relied on for generations, is actually the opposite of conservation and not at all in the greater good.

The model of conservation most common in Africa and Asia is known as Fortress Conservation.” It’s called this because “unauthorised” people (for which read “local”) are kept out of the conservation zone by military-level force. It is WWF’s fervent support for this model of conservation that has led to the atrocities exposed in the Buzzfeed report. Fortress Conservation justifies brutal evictions of tribal people on the basis that any kind of human presence is a threat to the environment, despite a wealth of evidence showing that, on the whole, tribal peoples live peacefully and sustainably on their ancestral homelands.

Paradoxically, once a national park or wildlife reserve is established, the same groups who kicked out the locals then welcome thousands of other (paying) people onto the land. Many protected areas encourage tourism, facilitate trophy hunting, or permit logging, mining or other resource extraction. Under Fortress Conservation, the ecosystem is not simply preserved in its natural state, it is managed according to economic imperatives.

Far from an untouched natural oasis, a wildlife reserve quickly becomes a wildlife theme park: four wheel drive vehicles careen across the land chasing selfies with rare species, and later the tourists return to their resort to bask in chlorinated swimming pools filled to the brim year-round, even in areas where water is scarce. To meet the expectations of paying customers, charismatic species such as elephants or tigers are favored and nurtured at the expense of others, and often wildlife reserves contain higher populations of these large animals than they could naturally support. Some twenty per cent of “endangered” cheetahs routinely die in South Africa during transportation by conservationists. 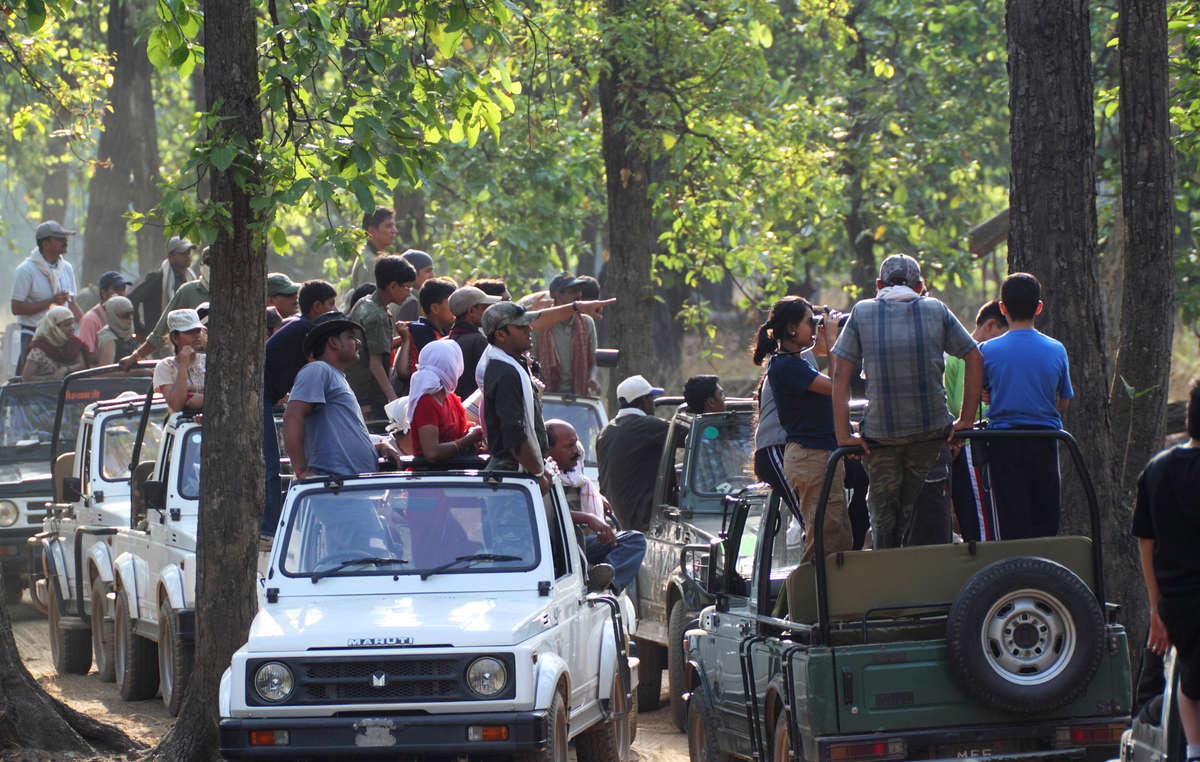 It’s important to note that in some European countries, people living in areas which have now become national parks generally continue to live there quite happily. Britain’s protected areas, for example, frequently encompass working farms, villages, and even whole towns, and the local communities and ways of life found there are considered part of the region’s charm as opposed to a blight on the landscape. Imagine if members of a community in Scotland had been shot by rangers who had caught them entering land reserved for wild cats or golden eagles. Though poaching of these species does occur, the fact that WWF seems prepared to tolerate violence against African rhino poachers but presumably not against Scottish eagle poachers reflects its attitude to the people involved, not the animals.

There is no justification for how big conservation treats Indigenous peoples: conniving with governments to kick the locals off their own land because they, the outsiders, supposedly know what’s best for it, yet coincidentally go on to turn huge profits from the resources they have commandeered “for the greater good.” Big conservation attempts to justify its land grab by claiming that the local people don’t know how to care for their own land and don’t respect wildlife. Yet, for generations, these communities have made their living as hunter-gatherers or subsistence farmers: their day-to-day survival has always depended on their profound understanding of their environment and ability to maintain healthy wildlife populations, but somehow the myth persists that saving the planet is the white man’s burden.

In adventure stories, films and books, on scientific expeditions, army exercises, commercial safari trips and much more, hiring local guides or trackers is seen as essential because no one else knows the terrain as well as they do, no outsider can read and interpret it as they can. We risk the future of the planet if we allow big conservation not only to ignore Indigenous expertise, but also to actively accelerate its destruction. When tribal peoples are forced off their land, it means they will no longer use, refine or update their land and wildlife management skills. This precious knowledge, the most intimate understanding we have of these ecosystems, accumulated over thousands of years, erodes alarmingly quickly: it can be lost entirely within a generation.

When eco-guards abuse and alienate local communities, they also help to deliver key intelligence into the hands of the enemy. Disaffected tribespeople, deprived of their land and harassed by wildlife guards, are easy prey for poachers who offer the tribes not only money but also retribution against their persecutors in exchange for tactical knowledge of the forest. By side-lining and brutalizing tribal peoples, WWF and others like it are making the original and best conservationists into the enemies of conservation.

The world’s most famous natural environments, from the Amazon to the Serengeti, are the ancestral homelands of millions of tribespeople who have shaped them, been dependent on them, and nurtured and protected them for millennia. And now, when 80% of our planet’s current biodiversity is found in tribal territories, the fact that endangered species still survive on their land yet have been wiped out elsewhere, should speak for itself.

United Nations Special Rapporteur Victoria Tauli-Corpuz, said in a recent report: “When bulldozers or park rangers force Indigenous Peoples from their homes, it is not only a human rights crisis, it is also a detriment to all humanity. Indigenous Peoples have long stewarded and protected the world’s forests… They are achieving at least equal conservation results with a fraction of the budget of protected areas, making investment in Indigenous Peoples themselves the most efficient means of protecting forests.”

Anyone who truly cares about the planet must stop supporting any form of “conservation” which wounds, alienates and destroys the environment’s best allies. It’s time for a new conservation that recognizes Indigenous peoples as senior partners in the fight to protect their own land, not as “squatters” and “poachers” to be evicted and criminalized. WWF must be held accountable, conservation must change, and we must demand a new approach that puts Indigenous peoples at its heart. It’s best for tribes, for nature, and for all humanity.