Wilderness Safaris is a tourism company with lodges scattered throughout southern Africa.

After the Botswana government closed the Bushmen’s only water borehole and forced them from their land, Wilderness Safaris opened a tourist lodge on their land, complete with bar and swimming pool.

This page was last updated on November 28, 2019 and may contain language which is now outdated.

h3. ‘Our journeys change people’s lives’ Wilderness Safaris claims that its trips ‘change people’s lives’. This is certainly true in the case of its Kalahari Plains Camp, which was built without consulting "the Bushmen":/tribes/bushmen on whose ancestral lands the lodge sits. Wilderness Safaris opened the lodge after signing a lease with the government which hopes to develop tourism in the reserve. However, the lease does not acknowledge the Bushmen’s rights to use and occupy their traditional territories, as established in "the 2006 High Court ruling":/tribes/bushmen/courtcase#main. h3. ‘Various Bushmen clans have thrived in this area for centuries’ Wilderness Safaris has located the Kalahari Plains Camp within the traditional territory of the Gana Bushman band called the Kgei. The boundaries of the territory were agreed at a meeting between the Bushmen’s organization, First People of the Kalahari, and the government’s Department for Wildlife and National Parks in 2001. notextile. 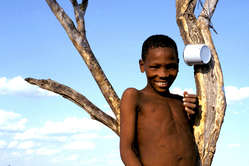 Bushman boy, Botswana. © Fiona Watson/Survival
When the High Court ruled that the Bushmen have a legal and constitutional right to occupy their traditional territories, it meant that they have the right to use and occupy all their territories, including the land on which the camp is situated and the surrounding area it uses for game drives. h3. ‘Water is the most precious commodity in the desert’ Wilderness Safaris knows that ‘water is the most precious commodity in the desert’. It also knows that the Bushmen are struggling without access to water, a fact highlighted by the UN Special Rapporteur for Indigenous peoples who found that Bushmen in the reserve ‘face harsh and dangerous conditions due to a lack of access to water’. However, this did not stop them from opening a swimming pool at the camp. h3. 'We seek to actively engage local [Bushmen] people and to integrate them into the potentially mutually beneficial ecotourism industry' ("From sister company Safari Adventure":https://www.safariadventurecompany.com/lodge.asp?LD_ID=30&LC_ID=236 ) 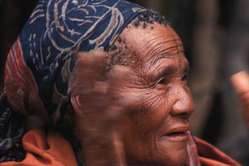 Bushman woman. © Survival
Despite opening the camp without consulting them, Wilderness Safaris claims that it does engage with the Bushmen. However, there is nothing ‘mutually beneficial’ about the Kalahari Plains Camp, which allows its guests to sip cocktails by a swimming pool while the Bushmen struggle to find enough water to survive on their lands and, until recently, were banned from using their water borehole. h3. 'A nature walk with these knowledgable Bushmen… will not only enhance your safari, it might just change your approach to life!' Like many tour operators, Wilderness Safaris uses the Bushmen to promote its lodge, offering its guests an interpretive ‘Bushman walk’. However, guests will not gain insight into the lives of the CKGR Bushmen who are threatened and intimidated by Wildlife Scouts and Paramilitary Police for attempting to hunt food to feed their families. Wilderness Safaris should use its influence to tell the Botswana government it will not tolerate the authorities' abusive and degrading treatment of the Bushmen. * "*Read Wilderness Safaris’ response to Survival's boycott*":https://assets.survivalinternational.org/documents/1311/kalahari-plains-response-to-continued-allegations-july-2010-2.pdf; * "*Download Survival's response to Wilderness Safaris (pdf)*":https://assets.survivalinternational.org/documents/472/Survival_International_responds_to_Wilderness_Safaris.pdf »h2. From Survival's website

"*The Bushmen*":/tribes/bushmen h2. From the web

"*Wilderness Safaris responds to Survival's boycott, with article from ‘independent’ researcher James Suzman who is, in fact, a senior De Beers director*":https://www.wilderness-safaris.com/news/press_release_detail.jsp?id=20728