Logging is a highly profitable and destructive business. Many companies and groups supplying the industry are prepared to do whatever it takes to get their hands on wood.

This is often at the expense of tribal peoples. Loggers destroy the forests that serve as their homes, their main source of food, and the foundations of their societies and cultures.

People have always placed great value on wood. Long used as the primary source of fuel by people around the world, demand for it today mainly stems from its use in construction or in making furniture, tools and even car dashboards. Logging affects tribal peoples in different ways – depending on how the relevant government sees it, or the type of wood being targeted. Sometimes loggers operate with the government’s permission. It grants licences to work on tribal land, often without the tribe’s consent. Other times, loggers invade tribal peoples’ land without any permission at all. In both cases, the loggers’ presence is devastating: tribal peoples’ homes are chopped down and transported to a sawmill or market, sawn and sold. h2. Case studies h3. Uncontacted tribes in Peru Logging is one of the biggest threats to "uncontacted tribes in Peru":/tribes/isolatedperu. The country is home to some of the world’s last commercially-viable mahogany trees. Coincidentally, and tragically, these trees are in the same parts of the Peruvian Amazon as some of the world’s last uncontacted Indians. notextile. 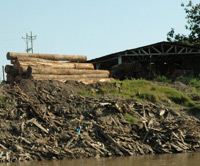 Mahogany stacked high on a river bank
in Peru's Amazon. © Survival
Loggers are often armed and may shoot at the Indians if they come across them. Violent encounters have been reported and, in the mid-1990s, when loggers made contact with the previously uncontacted Murunahua tribe, an estimated half of the Murunahua died. Logging activity "has forced some uncontacted Indians to flee across the border into nearby Brazil":/news/4333. Brazilian government officials have photographed houses built by the Indians and collected arrows belonging to them. h3. The Penan, Malaysia "The Penan":/tribes/penan have suffered from logging since the 1970s. Their land has been devastated: the trees chopped down and game scared off, the rivers silted up and fish killed. Towards the end of last year the Penan accused "workers from two Malaysian logging companies of harassing and raping Penan women":/blog/2009/04/20/sexual-abuse-by-loggers-plagues-penan-women/, including school-girls. The most notorious logging company is Samling. Many Penan have taken matters into their own hands, setting up blockades in order to try and keep the loggers out. This is a sign of how desperate their plight is: the blockades often bring shortages of food, as well as reprisals from loggers or government authorities. h2. Take action Communities affected by logging need you to pressure governments into protecting their land rights. Speak up for the uncontacted peoples of Peru. Its government is subject to some local pressure. "*Your letters will keep up the vital international effort.*":/actnow/writealetter/isolatedindians "*Support the Penan by pressuring the local authorities of Sarawak.*":/actnow/writealetter/penanh2. From Survival's website