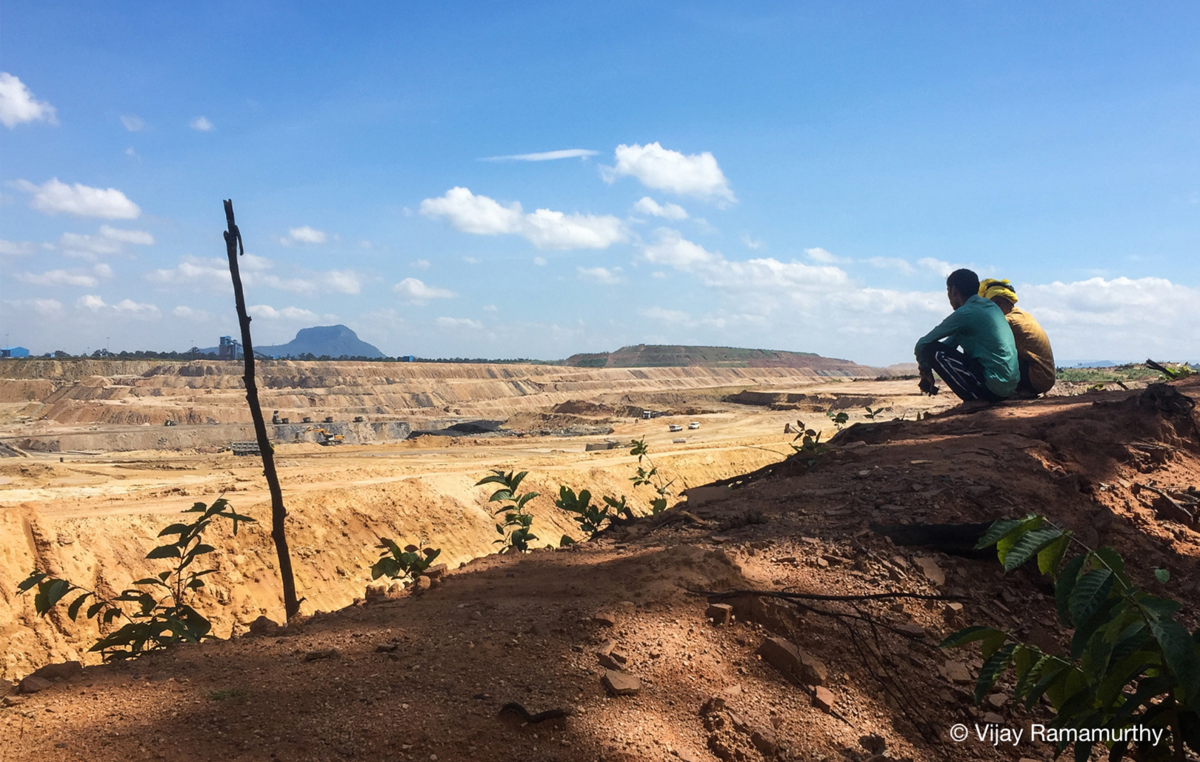 Two Adivasi men look out over an apocalyptic landscape – the vast coal mine that has replaced their ancestral forest, Hasdeo Forest, Chhattisgarh. © Vijay Ramamurthy

Representatives of India’s Adivasi (Indigenous) people have denounced PM Narendra Modi for proclaiming his green credentials at COP, whilst simultaneously planning a massive expansion of coal mining on their lands.

The lands and livelihoods of tens of thousands of tribal people will be destroyed under Modi’s plan to open 55 new coal mines, expand 193 existing ones, and produce 1 billion tonnes of coal a year. Eighty per cent of the new mines will be on Adivasi land.

Vast areas of tribal forests are being sold off without the people’s consent. Corporations including Adani, Jindal and Vedanta are snapping up coalfields which are being auctioned as part of Modi’s coal rush.

One of the areas targeted is the priceless Hasdeo Forest in Chhattisgarh, home to twenty thousand Adivasis. Two mines are already operational there, and a third, Parsa, has just been approved. The Parsa mine will be operated by mining giant Adani, whose subsidiary was recently announced as a sponsor of London’s Science Museum. 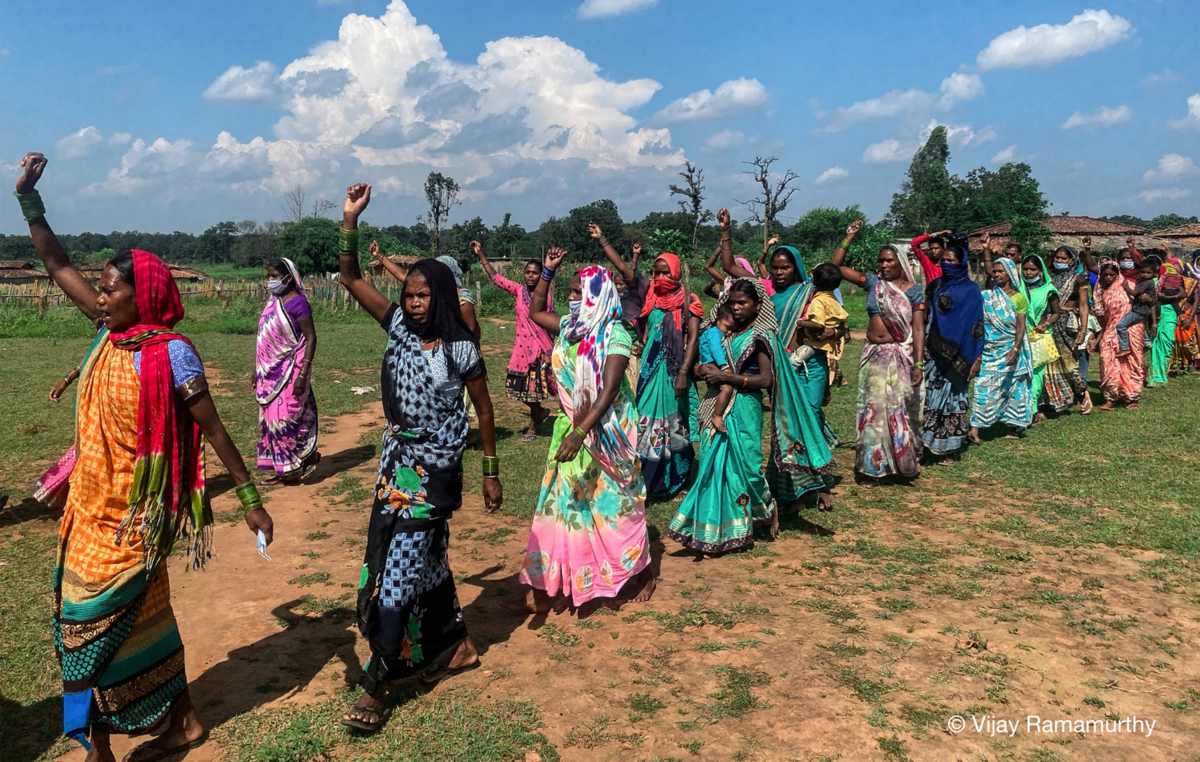 Shakuntala, an Oraon leader from Hasdeo, said: “If the mine comes to Hasdeo forest, the entire region, including the Adivasi villages will be destroyed. The forest gives us everything we need – if the mine is opened there will be nothing left. Everything will be uprooted. The Earth is our Mother. We are the sons and daughters of the Earth. So how can we watch anyone destroy our Mother? We are ready to give our lives for Mother Earth.

“Whenever the government wants, it gives our land away for industries and coal mining. So we Adivasis are not free. We do not accept this slavery. We will give everything we have to resist this slavery: our bodies, our souls, our lives, but we will never accept it. We will not give our forests and lands away. If we do, the Adivasi existence will be lost forever.” 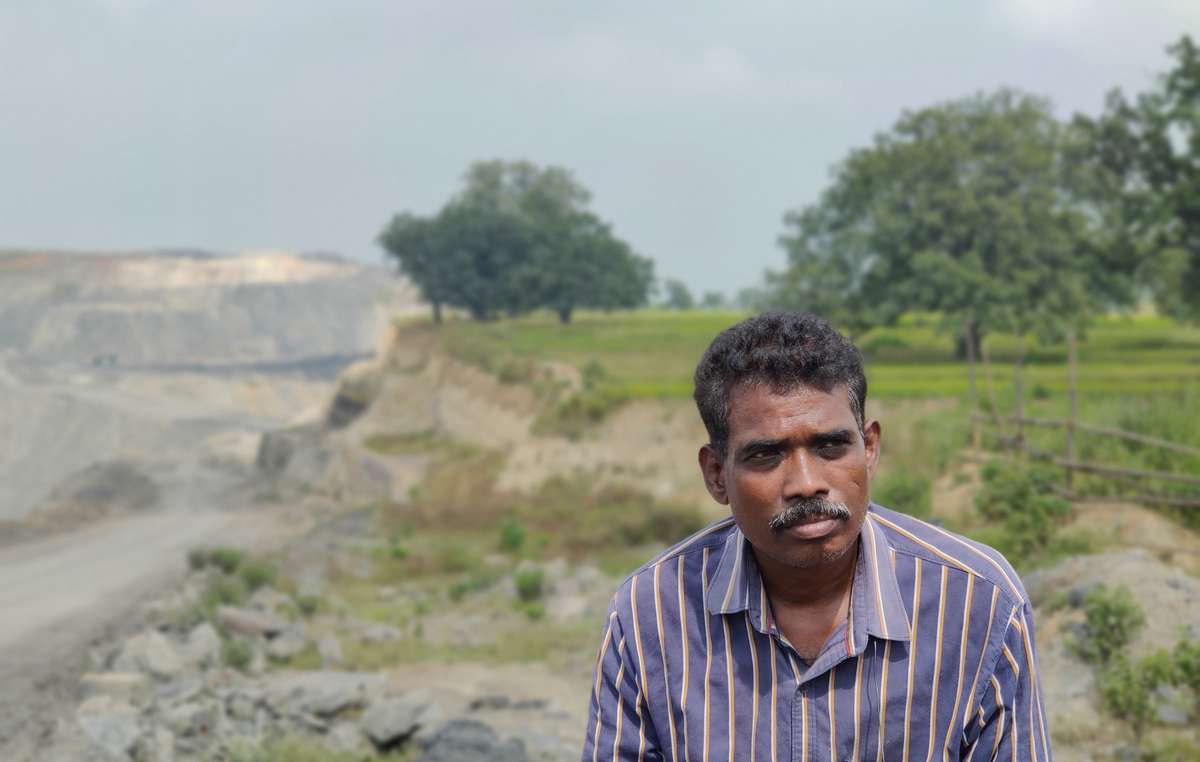 Phillip, an Oraon activist. His people’s land (behind him) has been sliced in two by a giant coal mine. © Survival

Phillip, an Oraon activist from Jharkhand, said: “We Adivasi people can save the Earth… but they see no value for this. They just want us to be dead… That waste dump you see behind me, that is how Modi sees us Adivasis. I want to say to Modi: You cannot sit in power long. To Adani and Ambani: big corporations like you people need to also pay attention. We Adivasi people will not just leave our lands to you. Because, if anything can save the world, it is the worldview of the Adivasi people. There is no other way. You are destroying the environment, which is Adivasi people’s life, by mining. Hear me straight: Change yourself, or nature will change you for the better.”

Athram, a Gond lawyer and leader from Andhra Pradesh, said: “Now, there is a world COP summit going on, and I want to warn the COP leaders attending the summit: You talk about environmental protection, but Adivasi people are the real protectors of the environment. The government is bringing in so many projects to destroy Adivasi people. The environment is getting destroyed. Our culture, our lifestyle and our forests are being destroyed by this government.

“The same leaders of the government go to these summits, to lie that ‘I save the environment’ and so on. How big a lie can they get away with? Destroying our communities and destroying environment by imposing destructive projects on our lands, is against the [Paris] agreement. Here you are destroying our people and there [Glasgow] you are speaking about environment protection as if you are protecting it on your own. Why are you lying like this? We Adivasis… can take care of our lands; we know how to protect it. We want our lands, our territory. Who are you? You sit somewhere in Delhi and then go to meetings like this and speak as if you are a “great environmental protector.” Don’t lie like this.”

And Mukesh, a Ho activist from Jharkhand, said: “I want to send this message to the COP leaders who are of the opinion that they can save our environment, while also continuing to push mining and industrialization. Because of mining, our forests will be deforested, our rivers silted up. If our forests and ecosystems, which are our schools, are destroyed, then our knowledge will also be destroyed. If our knowledge gets destroyed, the future of the planet will be in danger. So, that’s why, to save the planet, you have to save the Adivasi people living in their ecosystems.”

Survival recently launched, in collaboration with Adivasi representatives, its Adivasis Against Coal campaign, to press the Indian authorities to stop coal mining on Adivasi land without their consent.