A letter from Survival and Congolese CSOs on colonial conservation

Below you will find a copy of a letter jointly written by civil society organizations in the Congo and Survival International about the impact of colonial conservation on tribal peoples and nature.

We write this letter to explain to the world what conservation means for tribal peoples like the Baka in the Republic of Congo. We have been driven to write it because the victims themselves are ignored and their voices silenced.

We have worked with tribal peoples on the ground for years and know the true price they have paid for conservation efforts.

Protected areas are created in offices in Brazzaville and during meetings between the government and international NGOs. Tribal peoples, as well as local communities, are not consulted about the projects carried out in their territories. Their free, prior and informed consent is not obtained.

National parks are a source of violence, hunger and deteriorating health for local communities. Tribal people are the most affected by these inhumane conservation policies due to their vulnerability and marginalization.

Anti-poaching squads – funded by international NGOs and the Congolese government – subject the local population to harassment, beatings and torture, putting their lives at risk. Tribal people are accused of “poaching” when they hunt to feed their families and even for setting foot on their ancestral land inside protected areas, while logging and trophy hunting are celebrated as forms of conservation. Physical violence is just one of many forms of abuse which tribal people suffer. Rangers steal their food and burn their camps and tools, spreading terror among communities, who do not feel free to move around and live on their ancestral land.

Messok Dja National Park is no exception, despite only being a “proposed” protected area. WWF and the Congolese government decided to create Messok Dja before consulting the local population. The right of the Baka and the Bakwele to free, prior and informed consent has not been respected. The communities are strongly opposed to the project and are angry they have been ignored. For years, park guards financed by WWF have been operating in this region, subjecting the Baka to countless abuses. People who already live in fear of persecution and violence cannot freely give their consent.

Anti-poaching policies in protected areas in the Republic of Congo favor repression over prevention strategies and raising awareness. No alternatives to restricting tribal people’s access to the resources of the forest are provided.

We condemn colonial conservation, which evicts people from the lands they have managed for generations. And we urge you to stop supporting this.

Big conservation organizations must recognize the expertise and knowledge of local communities as guardians of their own environments and offer them the resources necessary to protect their own lands under their own control.

Without the support and the participation of tribal peoples and local communities, conservation is doomed to fail.

If we want to protect the biodiversity and richness of our environment, we must support tribal peoples.

*Translated from the French original

Help us change conservation for the better. It’s too important to leave to the big organizations. 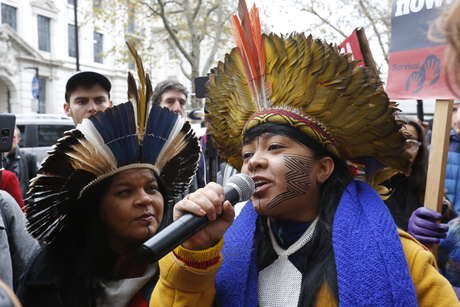 Why don't indigenous peoples in ...

WWF is complicit in human rights...