The Kawahiva are a small group of uncontacted Indians living in Brazil’s Amazon rainforest. They are the survivors of numerous genocidal attacks. Similar atrocities have wiped out many tribes in the region over the last century.

Today the Kawahiva are on the run, fleeing the constant invasions of their forest home by loggers, miners and ranchers.

They are in grave danger of being wiped out unless their land is recognized and protected by the Brazilian authorities.

Their territory, known as Rio Pardo, is in Mato Grosso state, where illegal deforestation rates are the highest on record in Brazil’s Amazon.

Rio Pardo lies within the municipality of Colniza, one of the most violent areas in Brazil. 90% of Colniza’s income is from illegal logging.

The Kawahiva’s plight is so serious that in 2005 a public prosecutor launched Brazil’s first ever investigation into the genocide of an uncontacted Indian tribe. Twenty-nine people suspected of involvement in killing Kawahiva, including a former state governor and a senior policeman, were detained but later released. The case has stalled for lack of evidence.

The Kawahiva are nomadic hunter-gatherers.

Past this, very little is known about them, because they have no peaceful contact with outsiders. They may be closely related to a nearby tribe called the Piripkura as they share a similar language, cut their hair in the same way, and use the same kind of arrowheads to hunt fish.

Neighboring tribes refer to them as the “red head people” and the “short people”.

The Kawahiva of the Rio Pardo are part of a larger group which has gradually split up as outsiders have invaded their land. It is likely that many were murdered by outsiders who steal their land and resources, and perished from diseases like flu and measles to which they have no resistance.

One group of Kawahiva has been monitored by the government’s Indian Affairs Agency, FUNAI, for 17 years. They were filmed by a field worker in 2011 – adults and children appeared to be healthy.

There may still be other groups of uncontacted Kawahiva hiding in the forest.

Like all tribal peoples, the Kawahiva have had to radically reorganize their society and adapt to their changing environment as a result of violence and the destruction of their forest home.

Old clearings in the forest suggest that several generations ago they probably cultivated corn and manioc and lived a more settled life.

But in the last 30 years, they have been forced to flee waves of attacks and invasions and probably became nomads in order to survive. The last garden in their territory was found when a new highway cut through the region over three decades ago. 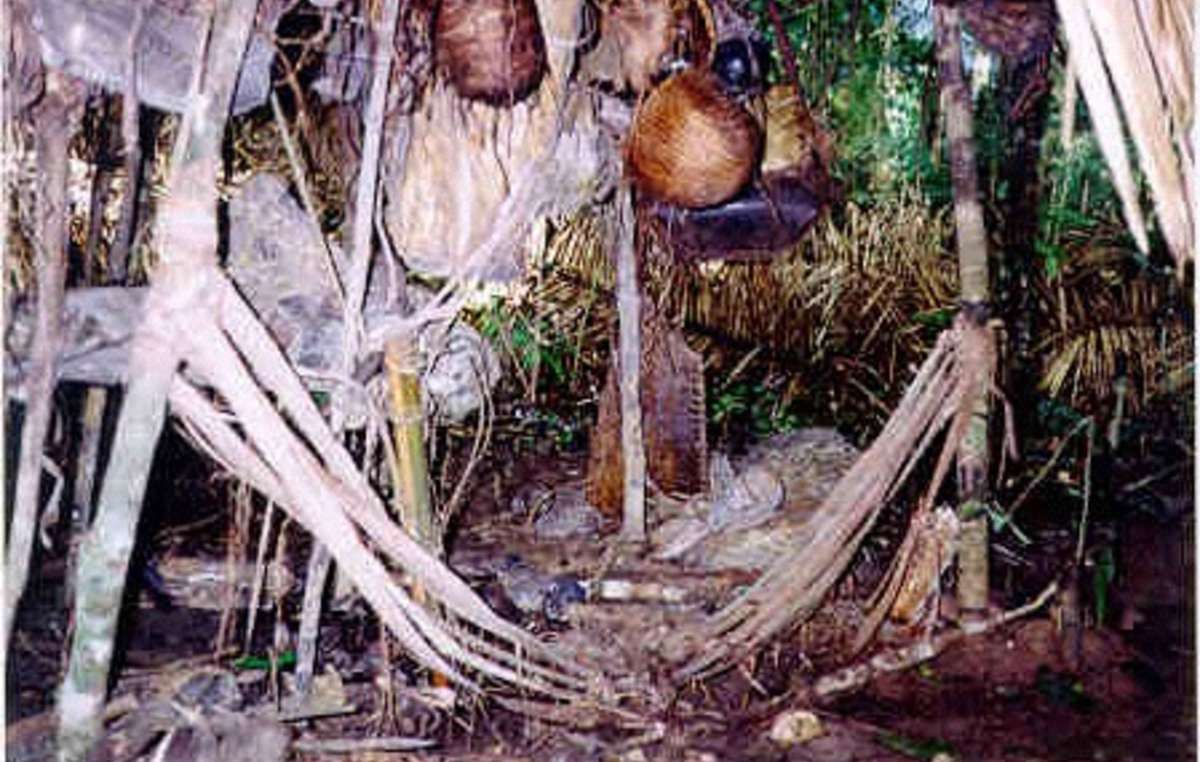 Now, the Kawahiva have been forced to adopt a nomadic lifestyle. They set up temporary camps where they stay for several days, before moving on to evade intruders.

They hunt wild game like peccaries, monkeys and birds, and fish in the streams on their land. They gather fruits, nuts and berries in the forest.

FUNAI field workers who monitor the Rio Pardo territory have found many possessions and artifacts, which give some insight into the Kawahiva’s daily life.

Bows and arrows and remains of food testify to the importance of hunting wild animals. One camp had large mounds of Brazil nuts buried in the ground.

They probably have pets, as small cages for parakeets and feathers been found.

The Kawahiva build intricate ladders up trees to collect honey from bees’ nests and use traps to catch fish in the streams by their camps.

One unusual discovery is fences made of palm branches surrounding the camps. This could be to keep wild animals away or to deter attacks from outsiders.

Powerful forces in the region are pitted against the Kawahiva. The Rio Pardo territory has been targeted by loggers, ranchers, land speculators and miners, who have also repeatedly challenged the temporary protection orders obtained by FUNAI. 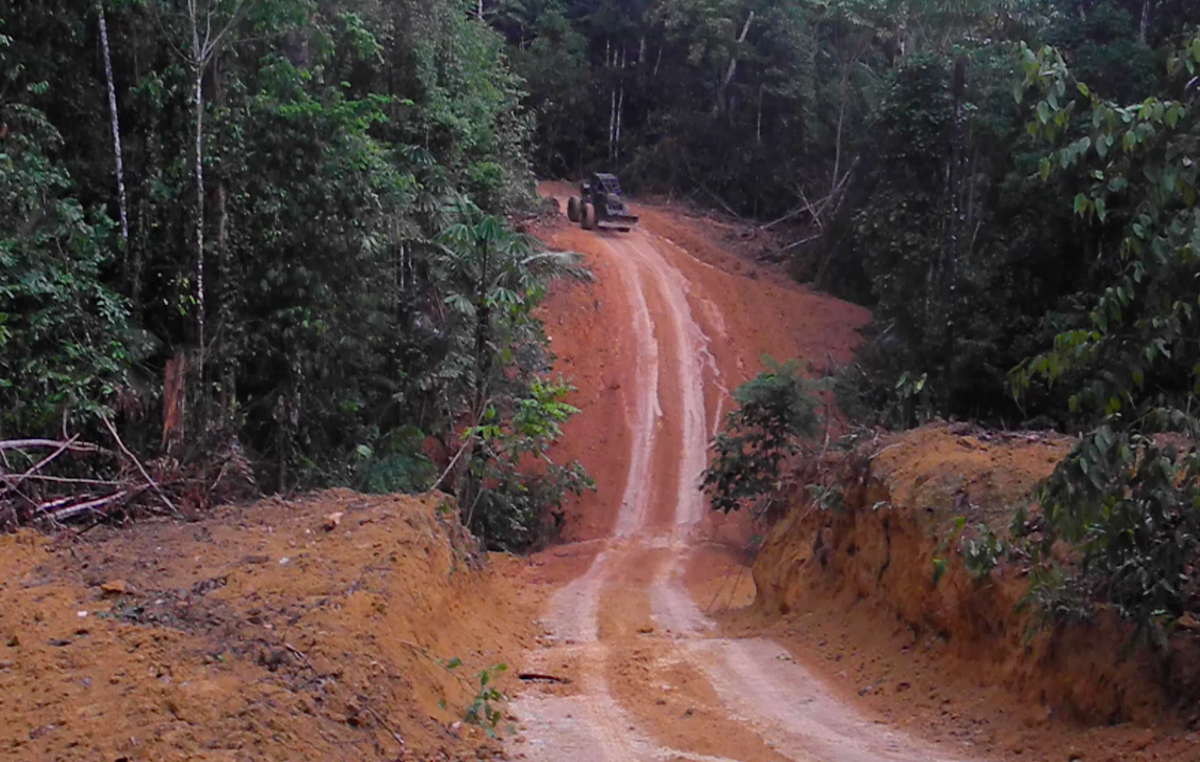 Armed loggers and powerful ranchers are razing the Kawahiva's forest to the ground. © FUNAI

In 2005, loggers and local politicians managed to persuade a judge to overturn one order protecting the territory. Survival campaigned successfully to have it reinstated.

Some loggers even filed an injunction questioning the existence of the Kawahiva, and an anti-indigenous local official claimed FUNAI “implanted” the tribe.

FUNAI field workers were threatened and prevented from protecting the area by a logging company, whose workers tried to terrorize the Kawahiva by flying planes low over their forest and opening trails, roads and clearings.

FUNAI has discovered logging trails 70 metres from one Kawahiva camp, raising fears that the Indians could succumb to an epidemic of disease introduced by the loggers.

It is crucial for the Kawahiva’s survival that the Rio Pardo territory is officially mapped out and ratified by Brazil’s president, thus permanently recognizing it as their land.

The Kawahiva are on the brink of disappearing forever and their genocide will be complete unless their land rights are upheld.

If they are to survive their territory, Rio Pardo, must be mapped out and protected urgently.

The decree authorizing the demarcation of the Rio Pardo has been on the Minister of Justice’s desk since 2013, but nothing has happened because of the concerted opposition of those who want to carrying on plundering the territory.

Meanwhile illegal invasions are increasing dramatically. 10,228 acres (4,319 hectares) of forest were destroyed between 2000 and 2011. The Kawahiva are encircled, fighting for their lives.

Watch a film containing unique footage of the Kawahiva filmed by government agents, and act now to give the Kawahiva a future. 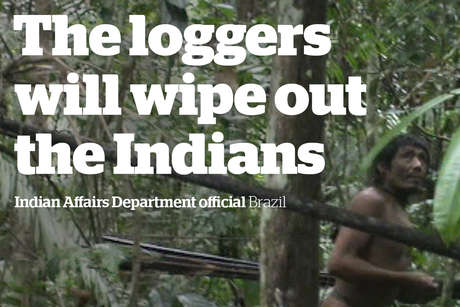