Ayoreo-Totobiegosode woman Ibore tells how, on 11 June 1998, their family risked everything and made contact.

We walked to a place where my husband Parojnai had sharpened a spear before. We stayed there, preparing our camp. After a while we heard the noise of a truck.

We went to get honey, because Parojnai had already found a tree with honey. Amajane [their eldest son] and I saw a bulldozer. We saw the bulldozer and we went near, no matter if the cojñone [white people, literally strange people] killed us, we did not care if they killed us. 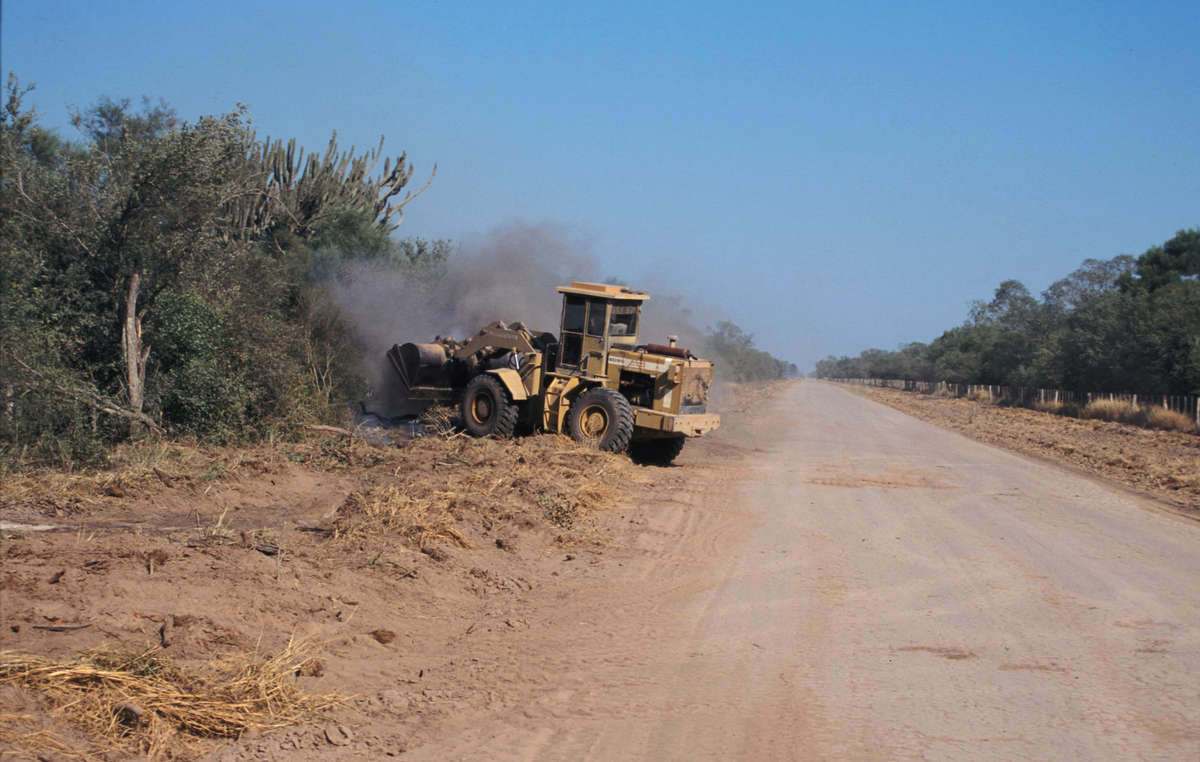 There we saw a little house [this was actually a mobile trailer for a Paraguayan bulldozer-driver]. Amajane said to us, ‘Stay here, while I go and find out what the cojñone are like, if it is possible to contact them’. At that time we had no knowledge of how the cojñone were. When he came back Amajane said to us, ‘I saw some cojñone but I got scared and I could not go closer.’

Parojnai asked me if I was scared of the cojñone or not. I answered, ‘I am not scared, I am going to get closer to them.

Berui [their second-eldest son] said: ‘I’m going with you too.’ But I said to Berui, ‘I don’t want you to come with us. If the cojñone kill us, you are going to look after your little brothers [Tocoi and Aripei] and live with them. Berui obeyed and he stayed with his little brothers. We went along the side of a road, towards the cojñone.

We spotted the house of the cojñone. When we got to the little house Parojnai shouted, ‘I am Parojnai’. But it looked as if nobody was in the house. In that moment Amajane shouted also, ‘My name is Amajane. I haven’t come to kill you.’ 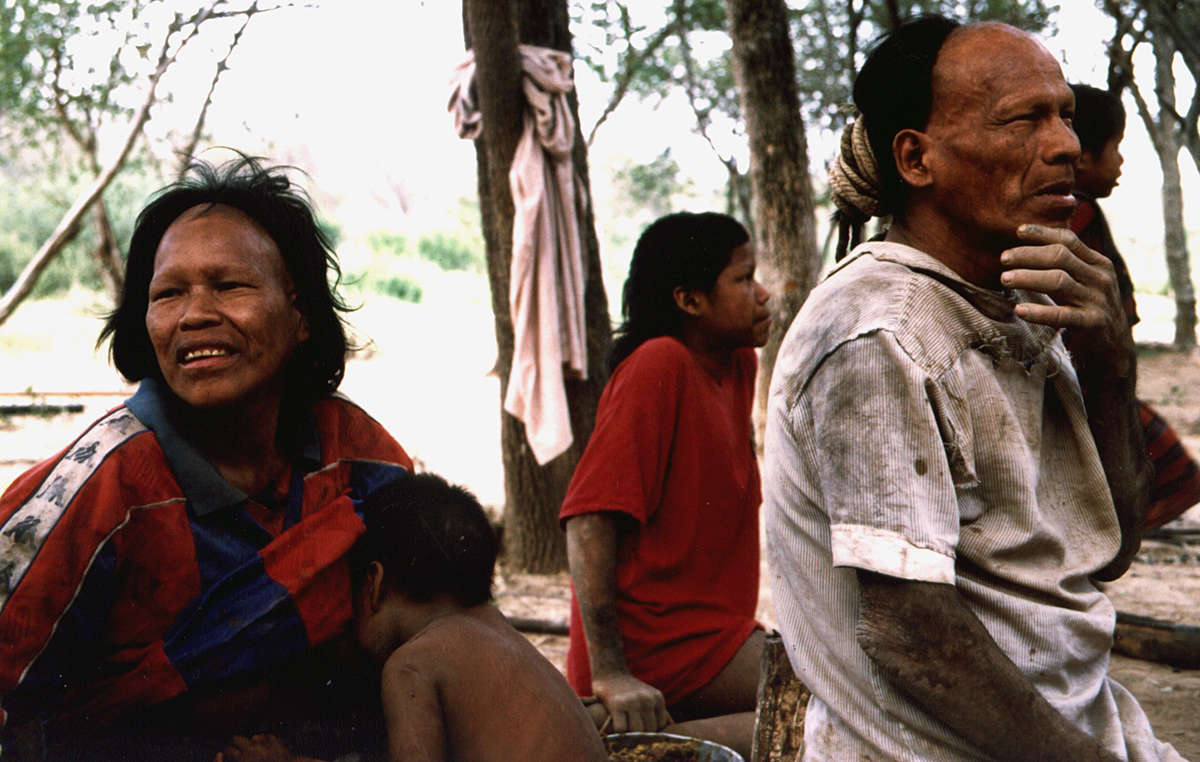 Ibore and Parojnai with their children the day after they emerged from the forest in 1998. © Survival

Parojnai kept shouting, ‘I am Parojnai’, and suddenly a cojñoi came out and I saw what the cojñone are like; I saw that they are people like us. I told him again, ‘We don’t come to kill you, rather we want to live with you.’

The man said ‘Eha, eha, eha’ and I noticed that he was very scared. He kept moving his head and looking behind himself, it looked like he wanted to run. He stepped back and I said to him, ‘There’s no reason to run, we are not going to kill you, we are good people.’

I kept repeating to him ‘Don’t be afraid’. The cojñoi held something in his hand [a shotgun] and I asked Parojnai, ‘What is it that he has in his hand?’ and Parojnai answered, ‘It’s a weapon’. And I said to the cojñoi, ‘Don’t be afraid of us, bring us something to eat, we are hungry’. The cojñoi went into the little house and brought a plate full of biscuits and he ate the biscuits in front of us. I tried too, but I did not like them.

The man passed the biscuits around and laughed, ‘hi, hi, hi’, and he brought some stew on another plate. Just like the biscuits, he ate it in front of us, I also tried it, and I didn’t like it. 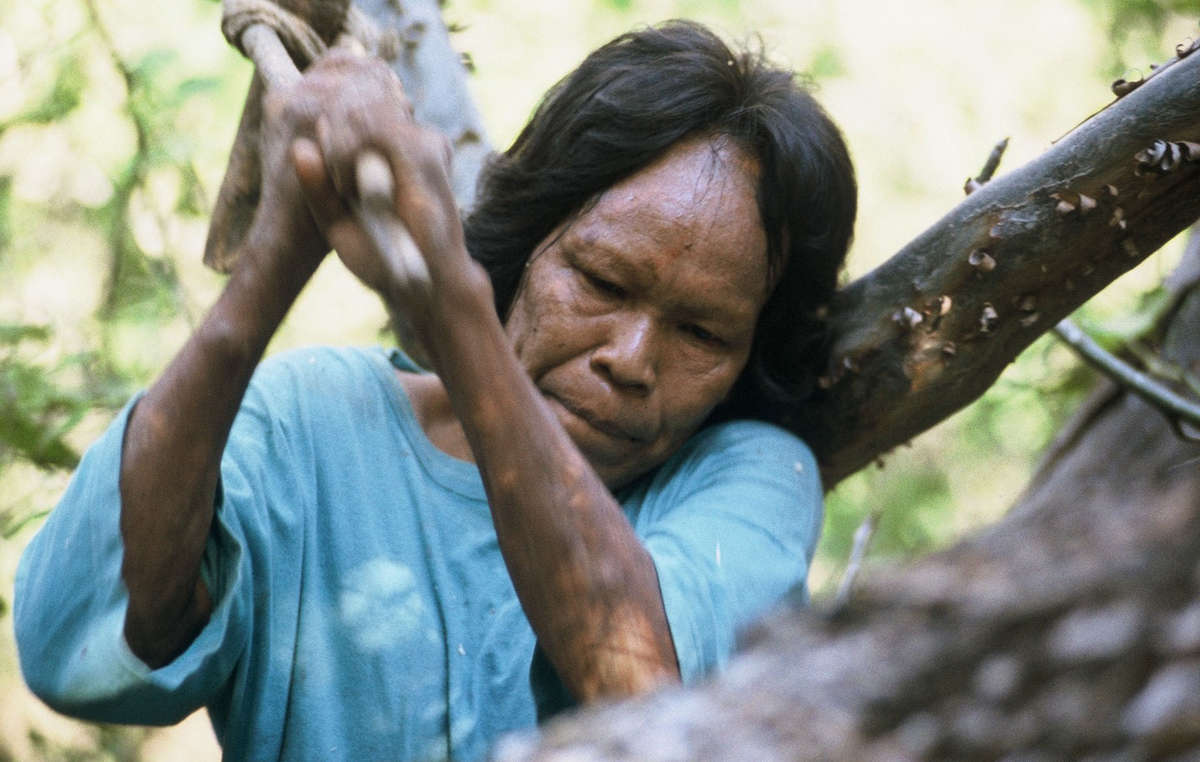 Parojnai said, ‘Bring us water, I’m thirsty, I want to drink water’. We saw a bucket and there was water inside and we drank. Amajane arrived just when we had already found water from the cojñoi. Amajane was afraid of the water and poured it out. I said to him, ‘You should not pour out the water.’

The cojnoi went into his little house and brought out a weapon. Amajane and his father stayed beside this man for the whole time, they followed him step by step. Suddenly, he shot in the air.

I got scared, thinking that he was shooting at my son and my husband. And I shouted, ‘Heeee’ out of fear, and suddenly the man took off his shirt and he passed me his shirt, laughing. And then I went to give him a necklace of purucode [black seeds] and I put it around his neck. Parojnai also brought out a necklace of purucode and he also put it around his neck.

In photos taken the next day, Ibore can be seen wearing the man’s red football shirt.

Ibore and her children now live in a small Ayoreo community on the edge of the forest. Parojnai contracted flu and tuberculosis soon after contact, and died of tuberculosis in 2008. 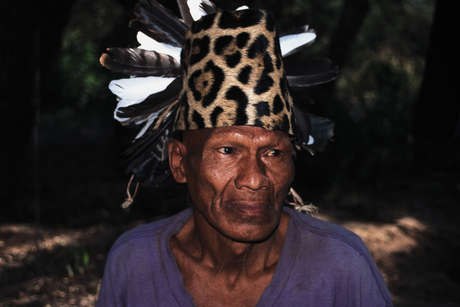 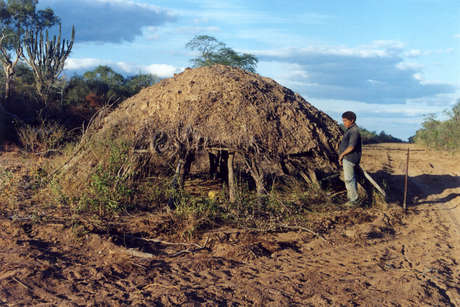 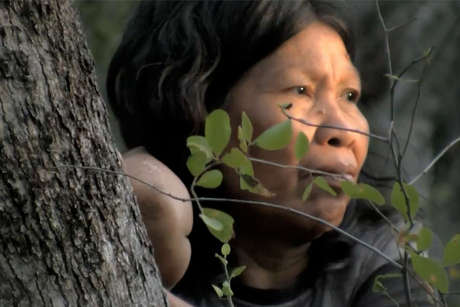